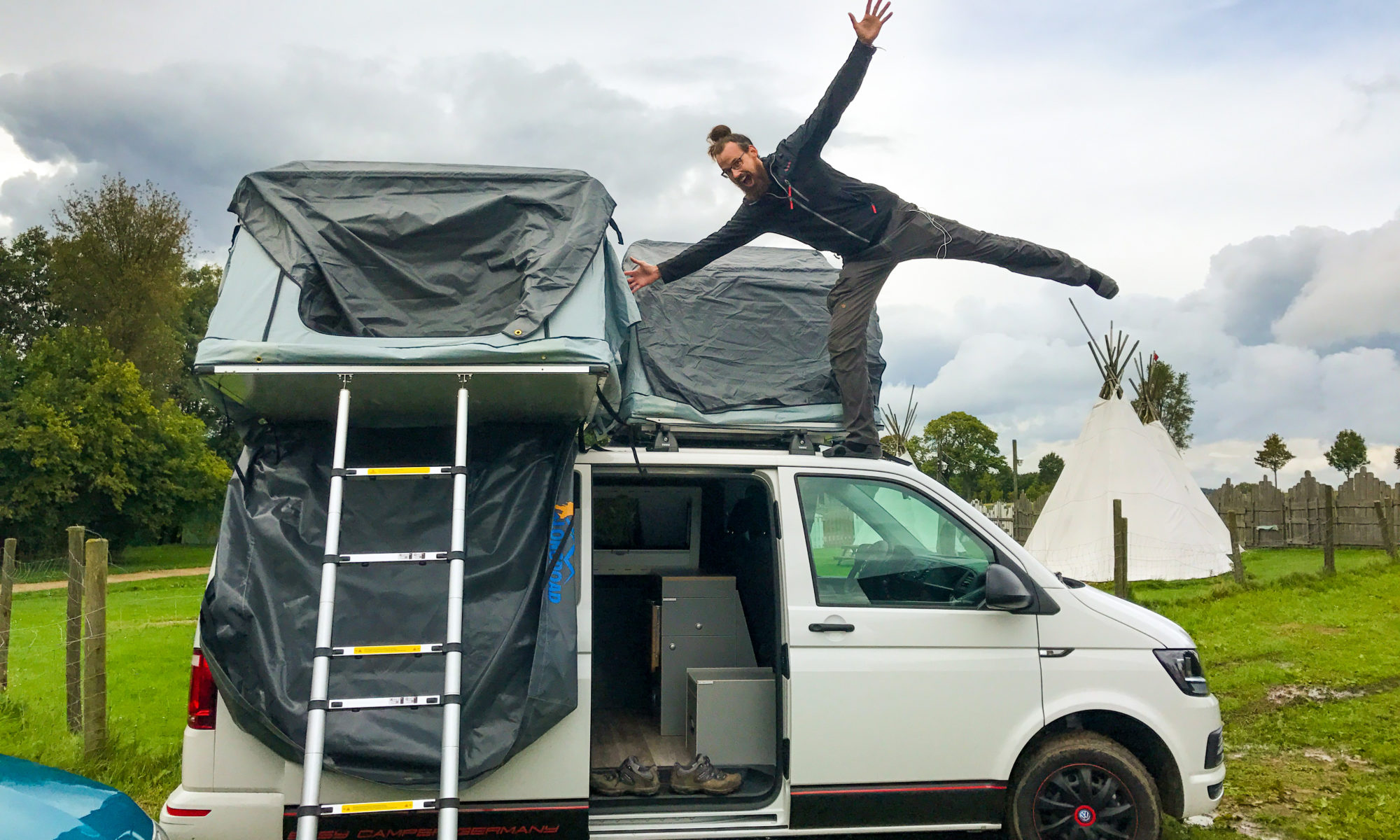 The certainly most frequently discussed topic with rooftop tent newbies is the question of the roof load. No topic causes more uncertainty and there is almost no one who did not ask himself these questions at the beginning:

Does my roof sustain that?

How much weight can my car carry?

No wonder that there is a need for clarification here. Because in normal everyday life you rarely get to load your car roof with heavy load let alone running around on it. Everyone has seen bikes on the roof. Sometimes craftsmen transport their ladder or equipment on the roof. But you know fully loaded roofs more from the 4×4 field ore from pictures of coaches in Africa or India. So, how is that exactly?

To anticipate it: You can. Your car roof is able to carry a multiple of the permissible roof load. So it is no problem to load your car roof with 200, 300 or 400 kg – indeed only in the state.

And this is the most important point: Apart from some dynamic movements you might occasionally perform in your rooftop tent, a rooftop tent with sleeping people is a static stress for the vehicle. The car stands solidly on its four wheels. The family of four sitting previously in the car sleeps now on the roof. The total load has not changed. Provided the permitted maximum weight of the vehicle is not exceeded there are no concerns.

But how is that possible? Won’t the car roof be pressed in at high roof load?

For sure, if I climb onto my roof and stand in the middle of the roof I will leave clear footprints on most of the car roofs. Depending on weight and motivation I will definitely succeed in pushing the roof through to the inside if I jump on it.

But: The load of the rooftop tent is neither on one point nor on the middle of the car roof.

A rooftop tent will always be installed on for your car suitable roof bars/car roof racks or a suitable roof basket. For each car there are specific roof bars, either directly from the manufacturer or from third providers. They are the same racks you can transport bikes with.

In the simplest case, the car roof racks consist of a stable aluminum or steel profile provided with feet at both ends. Properly selected, the feet fit exactly your car-make and model. If your car has rails, the feet enclose the rails. If you don’t have any, they are seated directly on the roof spars of your vehicle and will be fixed there.

Imagine your rooftop tent lying flatly on the racks. First of all, the load of the rooftop tent and the passengers spreads over 2 racks and from there over a total of 4 feet. Theoretically, each of the 4 feet carries on average 75 of 300 kg of the above mentioned family of four.

By the way: If you want, you can mount your rooftop tent on 3 or 4 roof racks. By that you spread the load further over up to 8 feet.

The engineering: Each roof is framed

No matter if you install the car roof racks on a car with or without rails: The load is always directed to the frame of the vehicle. The frame of the car is the reinforced part of the body. You can imagine it like a sceleton or a cage which also encloses the passenger cabin.

The whole roof is also enclosed by a frame – the so called roof console (crosswise) or roof rails/roof spars (longways). This lies on the so called pillars. With cars, those are the A-pillar, B-pillar and C-pillar. With vans and mini vans there is a fourth pillar, the D-pillar.

The body frame consists of multiply folded and reinforced steel profiles. These are exactly designed for taking the dynamic and static forces. These are spread out on the body so that the passengers are best possibly protected in the car – also in case of an accident.

Imagine your car overturns through a driving error or a collision and lands on its roof. The body is designed so stiff that it keeps the interior in shape as far as possible. The body is never crushed by the static weight of the vehicle. For that clearly more dynamic power would have to be spent (fall from a great height) or external forces would have to have an effect (scrap press).

Why is there a roof load limit at all?

You know now that your car can carry a rooftop tent, you and further persons. Nevertheless you should not leave the roof load completely unconsidered. The permissible roof load is limited by the manufacturer so that:

Every additional weight experiences so called g-forces through the laws of physics when driving, accelerating, braking and in cornering. Like a formula 1 driver being pressed into the seat when accelerating a multiple of its own weight load acts on every charge of a vehicle depending on the intensity of acceleration.

An example: On a children’s swing up to 2,5 g can occur. That means, the occurring forces ensure the child’s feeling 2,5 times its own weight through the swing. Expressed in a simple way: Suddenly, the 20 kg child has a weight of 50 kg. The nice side effect: This feeling is fun for us humans to a certain degree, like in the roller coaster (= 4 g).

Based on a rooftop tent that means: The 70 kg of the rooftop tent not only act downward on the roof racks and the body through the own weight of the tent. The occurring acceleration forces are much more interesting. Depending on the driving dynamics, they provide stress forward (braking), backwards (accelerating) and sidewards (cornering). Yes, there are even vertical forces upwards and downwards being transferred through the chassis up into the roof, depending on the roadway texture.

This applies to off-road drivers in particular travelling on rough terrain. But potholes and road bumps can also provide considerable vertical acceleration, even on normal roadways. These acceleration forces can amount to a multiple of the own weight momentarily. The cross bar as well as the whole chassis has to be designed for that.

In addition, the forces being generated by airstream and turbulence must not be underestimated. They occur all around the rooftop tent. Depending on

the airstream can generate considerable vibrations being perceptable into the vehicle interior.

TIP 1: Place the cross bars as far apart from each other as possible and position the tent evenly on the cross bars. Each bar should have the same distance to the tent edge to ensure an even distribution of the load.

The roof load shifts the centre of gravity

Besides, with all rooftop tents, the centre of gravity of the car is being shifted upwards by the transport of the additional weight on the roof. The a-class of Mercedes didn’t pass the moose test because it simply overturned in curves because of its high centre of gravity.

Lest that happens and in order to ensure the total stability and functionality while driving, the car manufacturers limit the roof load.

What is your cross bar capable of?

An important and not to be underestimated point is the permitted loading capacity of the cross bars. They usually are within the range of the permitted roof loading capacity of the vehicle (75 – 150 kg). That means: They carry your rooftop tent easily. It also applies: In the state, they usually withstand a lot more. That’s why you don’t have to worry about the everyday camping life on your roof.

It is much more important not to exceed the permitted loading of the cross bars during the ride. Because shear, tensile and compression forces which the material has to withstand also work on the bars (and especially on the connections to the feet) through acceleration and braking maneuvres as well as curve rides and the above mentionned vertical forces. Every additional kilo also means that the influencing dynamic forces on the fittings and the clamps increase.

What is your rail capable of?

Although you might think the rail is a functional element solidly designed it is degenerating to a decorative rim with modern cars. Often it is very simply designed because then it’s cheaper and more light weighted.

Some rooftop tent nomads report about their car rails being flexed under pressure, e. g. VW Touran II built in 2015 or later. If the distance between the cross bars is too narrow, this can possibly lead to the roof bar feet touching the roof and possibly denting the roof. To make sure that this does not happen to you just do the following test:

Climb onto the roof spar of your car over the front wheel and the A-pillar (at your own risk). Put one foot on the rail and shift your weight carefully to it. Important: Only move on the frame of your vehicle so as not to run the risk of denting your sheet. If the rail does not give in or only slightly it will pass the test. In everyday operation the rail won’t ever have to carry such a high punctual load.

TIP 2: When mounting make sure to position both cross bars on the rail so that they are seated as close as possible to the connection points to the body. Thereby you reduce the load on the free-standing part of the rail and avoid sagging.

What does this mean in practice?

The experience of many rooftop tent nomads shows that basically it doesn’t matter to drive around with a few more kilos on the roof. But please be aware that in case of insurance an exceeded roof loading can lead to a disclaimer.

By the way: Manufacturers officially do not distinguish between dynamic and static roof loading. Thereby they can withdraw from the warranty and are not liable for damages caused by overload when using the rooftop tent (unfolding, going around, sleeping).

For completeness it should be mentioned that overload will be punished according to the Motor Transport Authority’s schedule of penalties: The more the permitted total weight is exceeded the higher will be the penalty. The roof load must be added to the total weight of the vehicle. An exceeded roof load is not explicitely mentioned in the schedule of penalties. It is questionable how and when a control of the roof load and the identification of an exceeding should be acomplished in practice.

An insufficient load securing kann also be punished according to the schedule of penalties. Make sure that your rooftop tent is solidly connected to the car roof bars through the intended mounting plates and screws. Cross bars and rooftop tent have to form a frictional engagement.

TIP 3: Check the connection by shaking your rooftop tent strongly with all your weight after the mounting: Press and pull so strongly that the whole car is moved along. The rooftop tent should not be able to be lifted nor moved against the cross bar.

TIP 4: Retighten the screws of the mounting plates and of the cross bars after some kilometres of ride.

Summary on the roof load

All in all you can say: As long as your  properly mounted, properly loaded rooftop tent, ready for driving, is within the range of

you won’t have any problems with the weight of your rooftop tent on the roof nor with law.